This article about the features of “Dungeons of Doria” explains the initiative-system in use.

Basically, the initiative system of DoD is similar to many tabletop role-playing games: You roll for initiative, add some points from the character sheet and the resulting action points (AP) can be used for several actions.

Other dungeon crawler board games often allow characters a specific amount of actions, for example walking or attacking or two times the same action. Dungeons of Doria on the other hand allows any number of actions, as long as you have action points available.

Characters typically start with an initiative points (IP) value of 6 or 7. Some characters might have more or less, depending on how much weight (based on weapons and armor) they carry around. Every round, each character rolls 2D10 and adds his initiative value. Typically, this results in something like 20 action points. These action points now can be used for any of the following actions:

So a character with 20 AP could now walk 5 fields (5 AP), then attack a Monster with his dagger (9 AP) and walk another 4 fields to the next monster, resulting in 2 AP still available. One important thing to remember: The last action is allowed to get the character to negative AP without any consequences. As soon as a character reaches 0 or less, he is just finished for the round and cannot act anymore.

The small caveat: All characters and monsters use the same initiative board in the same round. After every of the above actions of the above example-player it is checked, who has the highest number of action points. If the player with 20 AP starts the round (as he has the highest AP) and then walks 5 fields, his counter on the initiative board will be lowered to 15 AP. If the next player has 16 AP, this player is now the character with the highest AP and goes next – and so on. If a monster (imprinted on the initiative board with fixed AP values) is higher than the next player, it is this monster groups turn and the monster moves and attacks (all monsters always move and attack, the do not have the feat of having multiple actions like the characters). So it could happen, that walking around to the next monster or looting a chest could allow monsters or other players to go first. 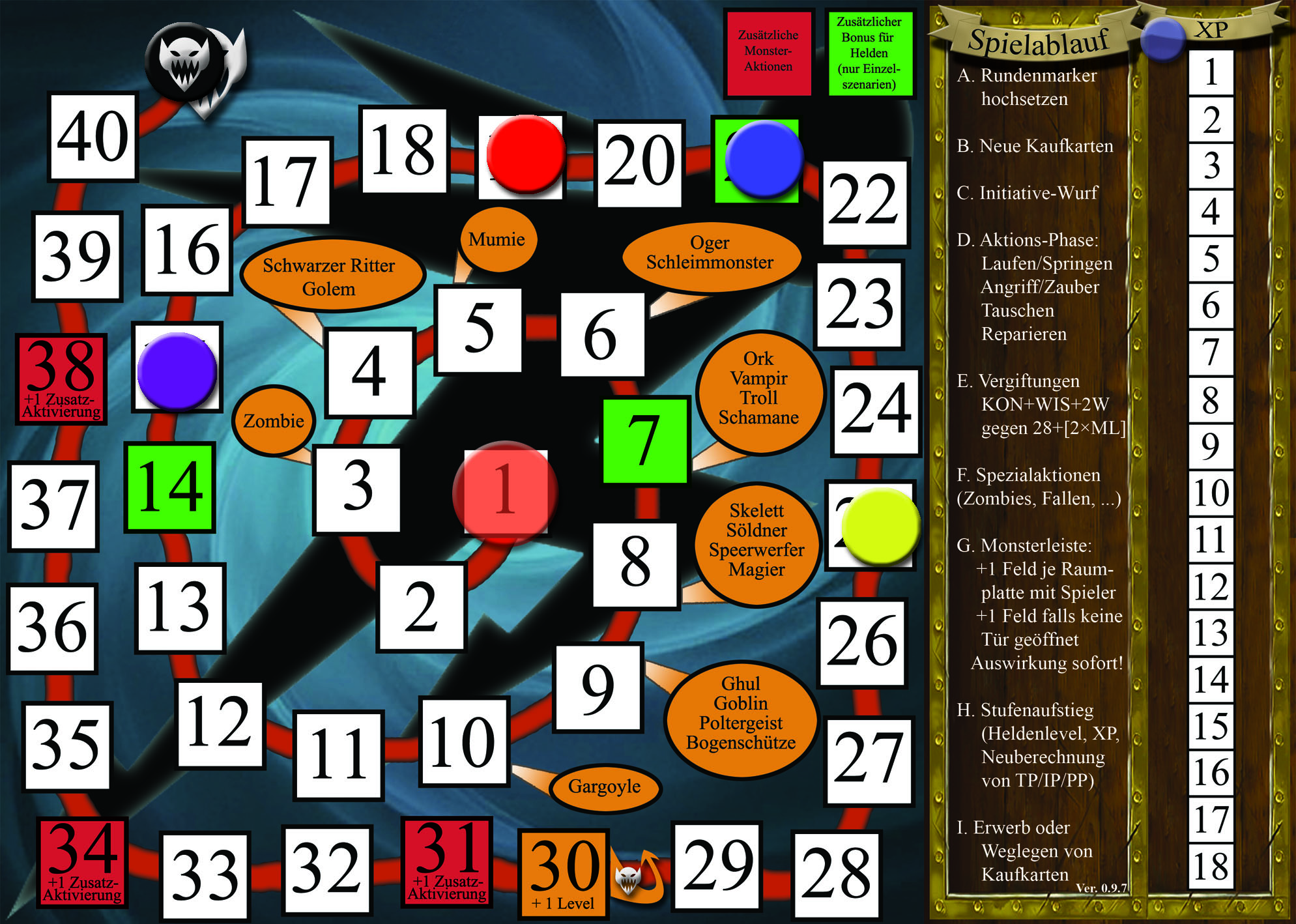 The initiative board in Dungeons of Doria tracks all current action points and also shows the automatic initiative of unmodified monsters. In the above example, the yellow player was lucky and rolled a 17, adding his IP of 8. With 25 action points and normal weapon that is not too fast or slow, yellow can most likely walk and attack before the monsters start attacking – hopefully killing at least one before they can even move.

See below for the next planned articles and let me know if you want to have any different articles (or one of the below faster).

Other articles on the Dungeons of Doria feature-series (planned or published):
Part 1: The modular dungeon
Part 2: Time is precious: The initiative-system
Part 3: Random Monsters
Part 4: Characters – Unique and still the same