I decided to create a ongoing series on why I created Dungeons of Doria and the unique features the game contains. Many people will ask “why create another dungeon crawler?” and this will partly the answer to this question. But the quick and easy answer: You will always like some game mechanics better, some less in different games, and I collected many game mechanics I personally liked in dungeon crawlers.

One of the main things I like in dungeon crawlers is a real grid for walking around, in particular the 1-inch grid used in older games like Hero Quest. I dislike games that only use “rooms” or areas where characters can move to – this removes some tactical gaming on where the miniature is located on the board and simplifies things a bit too much for my personal taste.

The second thing I want is a nice dungeon. It should look like a dungeon, like it is being used by the inhabitants. At the same time, playing the same scenario over and over again will not work in some games – especially if the scenario is pre-defined using rooms and always looks exactly the same. After playing the same scenario for two or three times (even with some randomness of encounters) you will know, what to look for or where to go first.

Throwing these two conditions (1-inch-grid and randomness) together resulted in 5×5 inch boards of rooms. The problem: There have to be doors, gateways or other connections that are at the same place on every room. Otherwise you will not be able to connect the dungeon rooms.
On a 5×5 grid, using the middle field as a door comes natural. Many other dungeon geomorphs or similar techniques use 2 gateways to connect boards, but these are normally using a bigger grid of 15×15 inch or similar. To achieve a higher entropy of different looking areas, the smaller grids are better suited.

However, I disliked always using the middle field as a door. Additionally, this meant that each room is closed in itself. I wanted some bigger rooms. This is why I created the “open rooms” – rooms that do not have a door, but at least one side that has a “door” across 2 or more fields (up to 5 fields).

The rules for laying out these 5×5 inch rooms are pretty simple, but effective:

This creates random dungeons and occasionally creates bigger rooms or weird looking structures that are forced by the open side rule. No dungeon ever looks the same, even if you use the same room tiles. To demonstrate this, I used the same 7 dungeon tiles a few times, shuffled the deck and started laying tiles. 3 of this set of tiles only contained rooms that work like a “tunnel” going straight ahead to the next room, on as a crossroad (with 4 exits) and two with open sides. Even with this limited set (mostly due to the fact that not all rooms artwork is finished yet), this created instantly 6 different dungeon layouts. The full game comes with 48 different rooms, some of which play much more with dead ends, labyrinth-like rooms or bridges.

The initial one shows a dungeon going straight for some time, then opening for the end room: 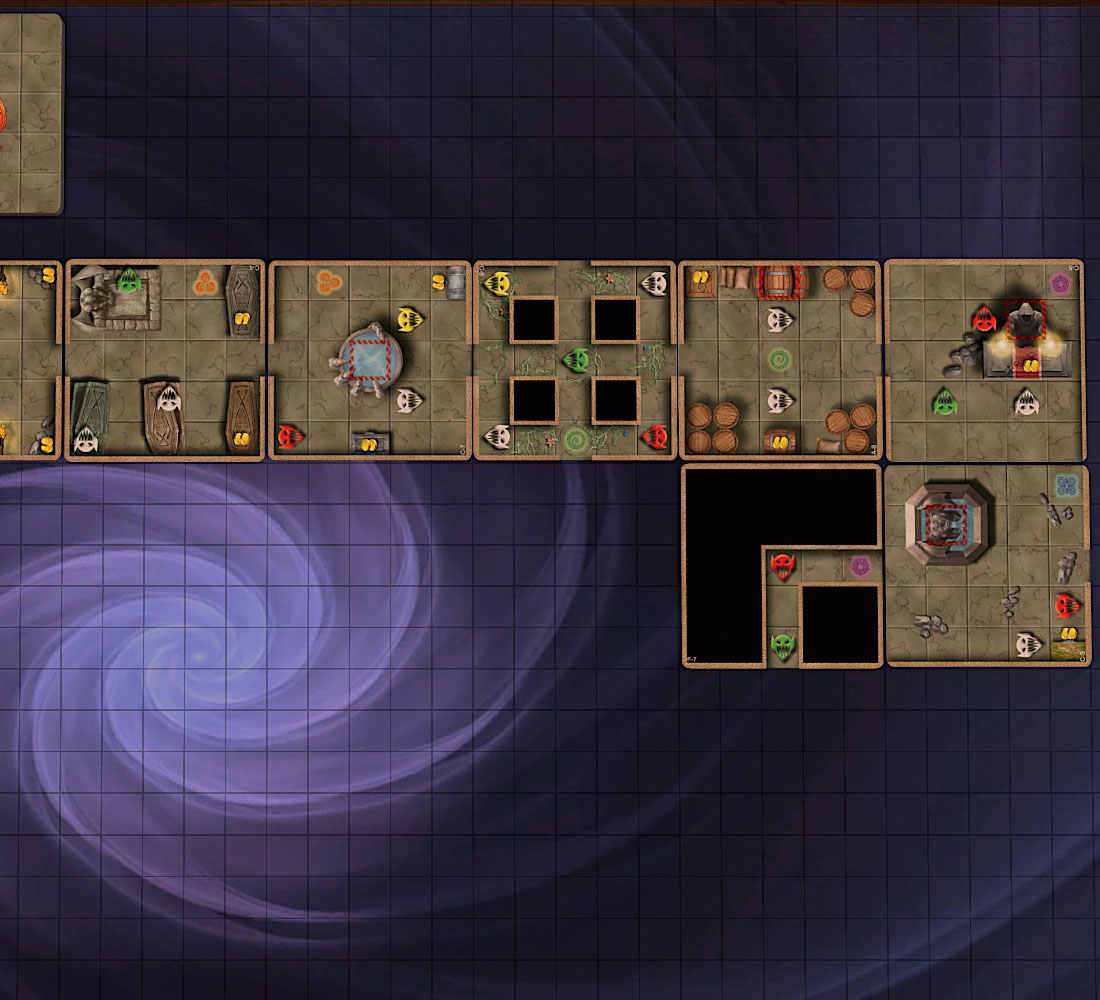 With the following pictures you can see the same dungeon tiles again, shuffled in different order and with different decisions made by the players (mostly “which door will be opened?”). 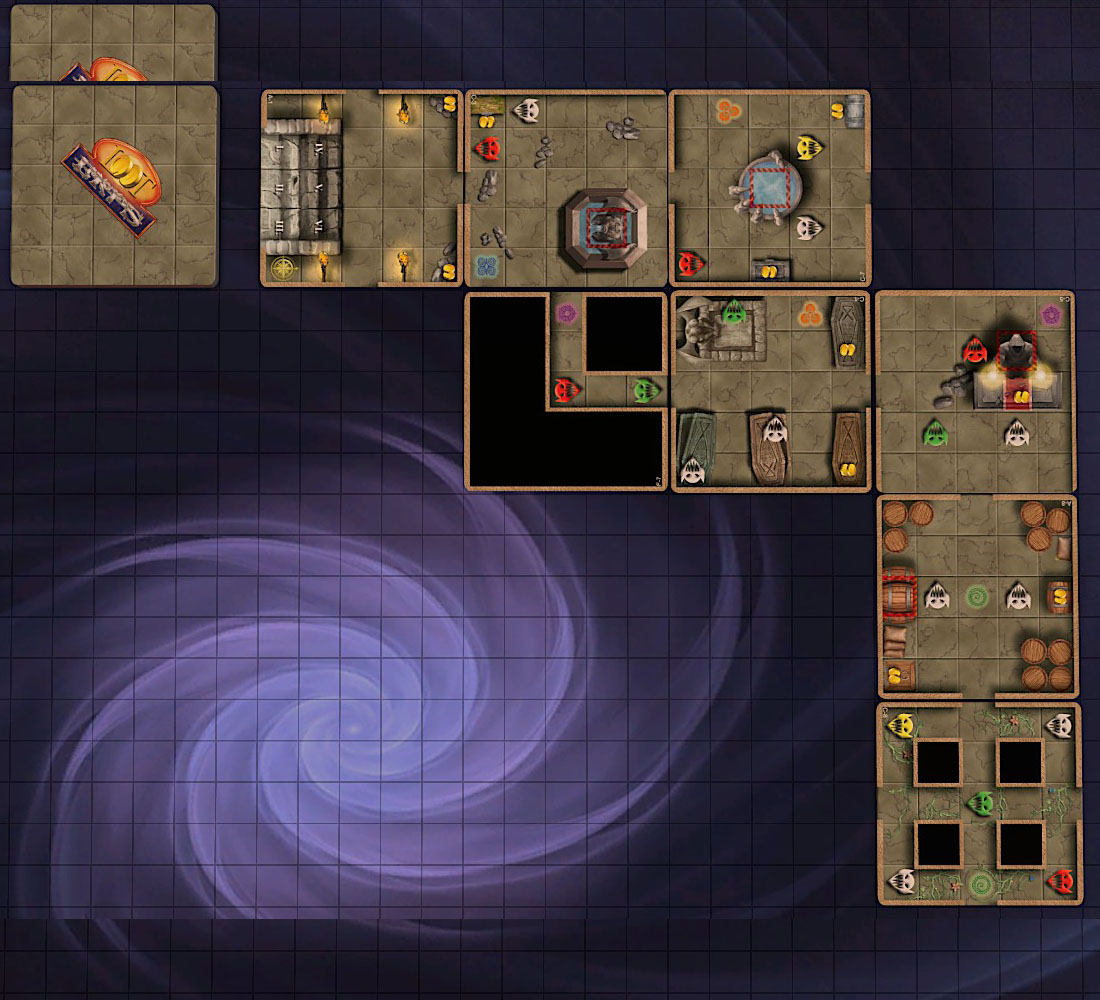 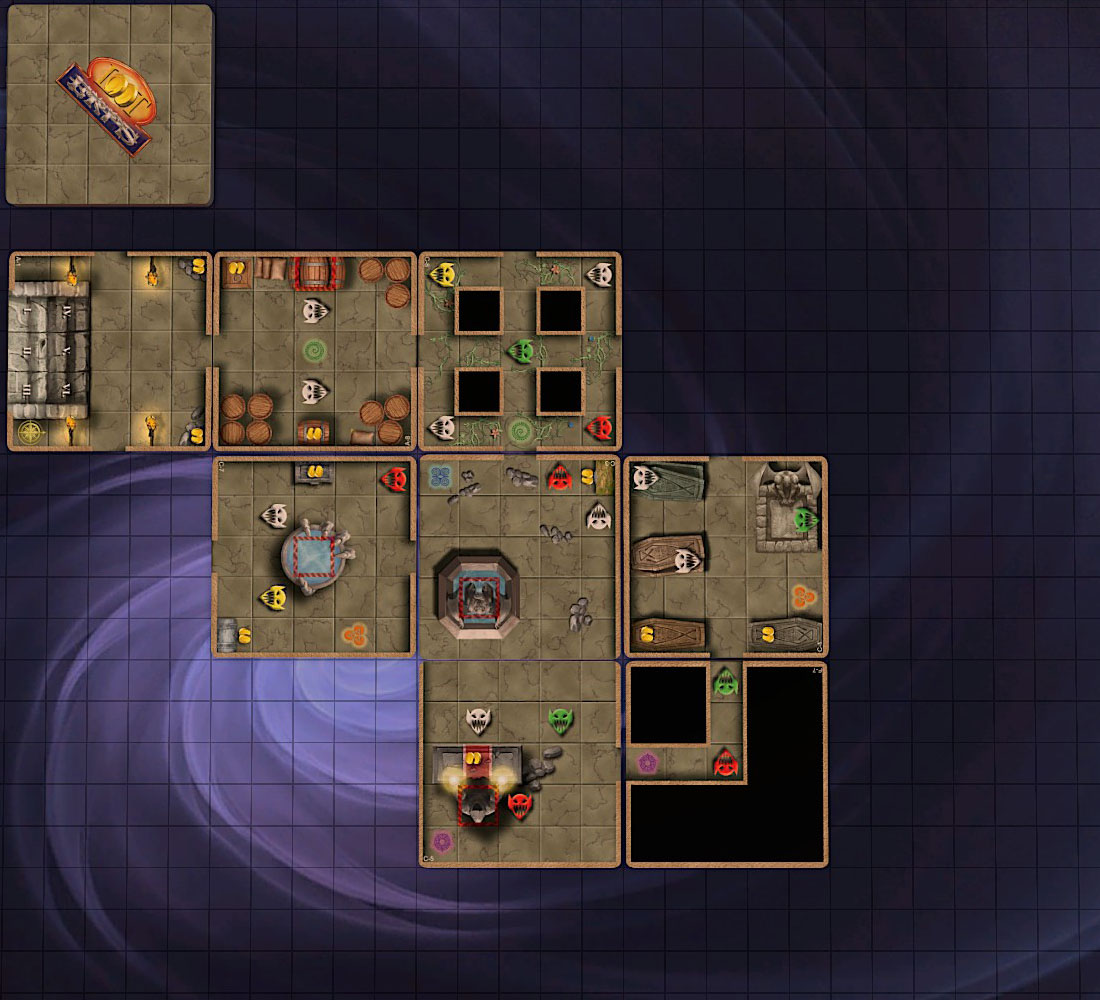 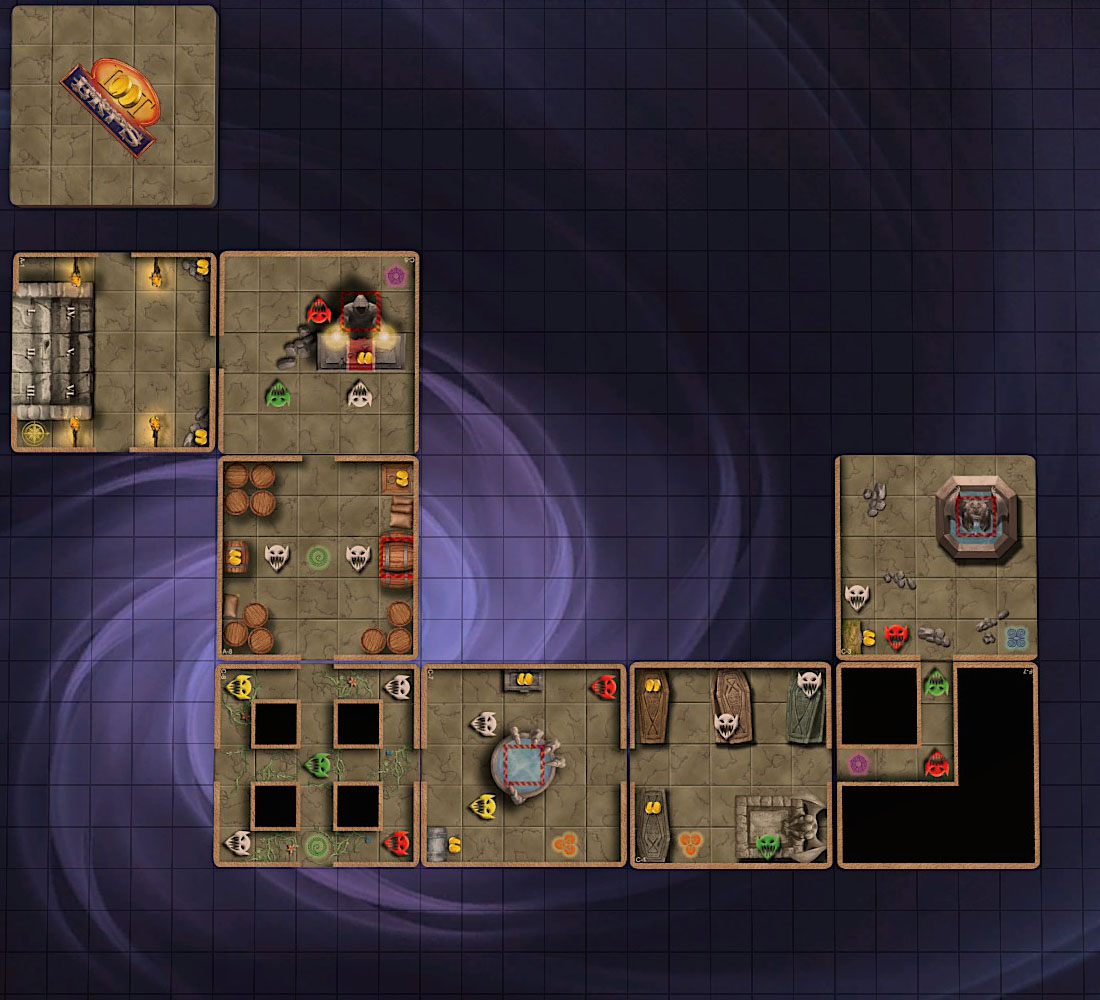 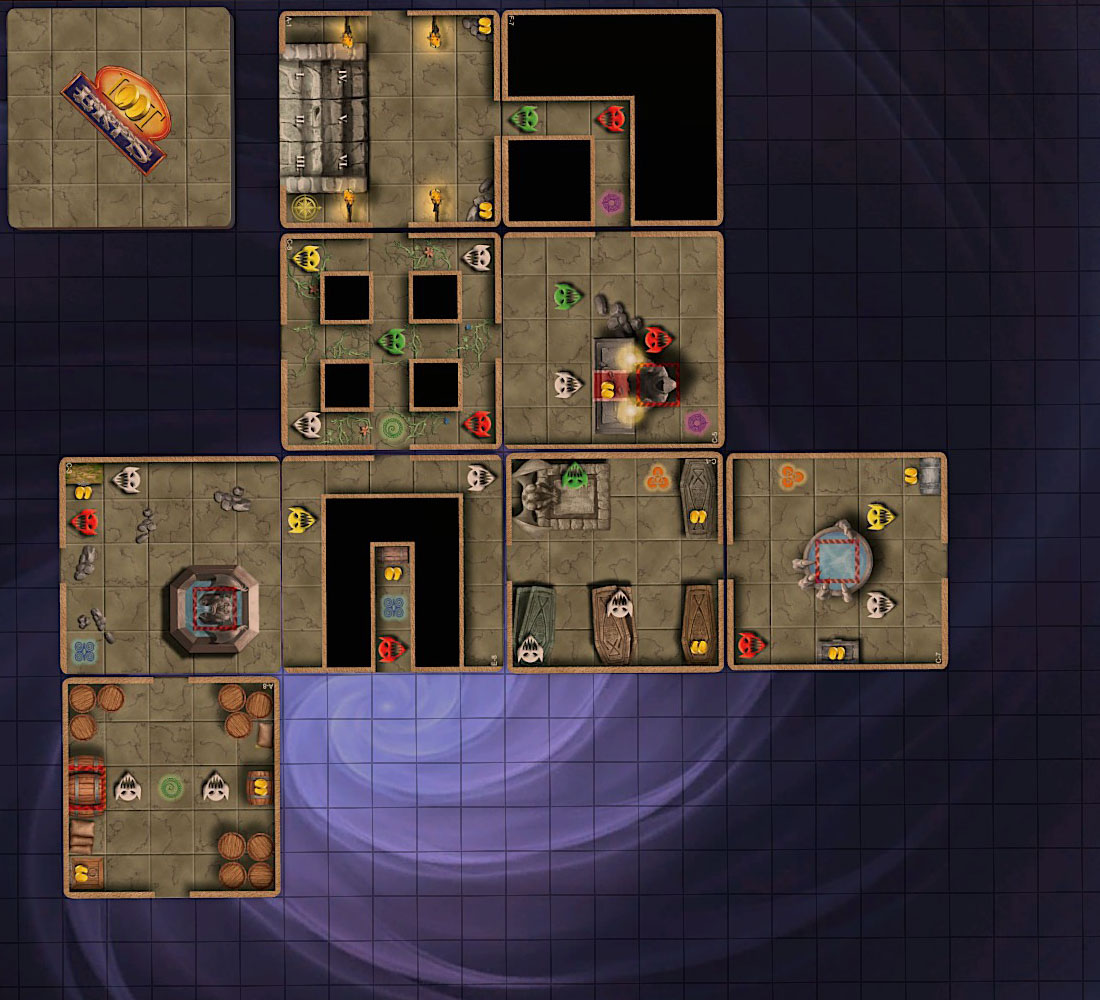 In the last picture you can see that a different tile has been added. This tile allows for a decision if it is a dead end or an open area. Depending on the decision, the dungeon looks completely different just based on this one tile.

See below for the next planned articles and let me know if you want to have any different articles (or one of the below faster).

Other articles on the Dungeons of Doria feature-series (planned or published):
Part 1: The modular dungeon
Part 2: Time is precious: The initiative-system
Part 3: Random Monsters
Part 4: Characters – Unique and still the same